CMAT monitoring progress of Cyclone Phallin, off the coast of India. 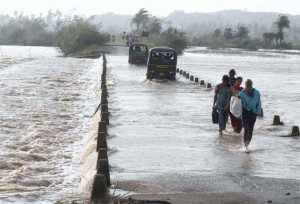 People in Odisha, India wade through flooded roads in the wake of Cyclone Phallin.

A fierce cyclone tore into India’s east coast on Saturday night, killing at least five people and forcing about half a million into overcrowded shelters as the storm threatened to cut a swathe of devastation through farmland and fishing hamlets. Cyclone Phailin, which made landfall early Saturday night near the town of Golpalpur in Orissa state, was expected to cause large-scale power and communications outages and shut down road and rail links, officials said.

CMAT continues to monitor the progress of this potential disaster.