Meet some of the inspiring CMAT volunteers who help us fulfil our mission both at home, and in communities around the world! 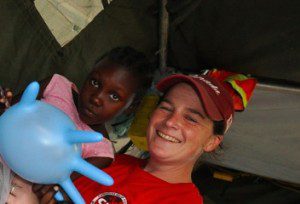 CMAT Volunteer Kelly Kaley, with a young patient in Haiti.

Between skiing, canoeing, hiking and camping, there wasn’t much that Chris and Kelly Kaley didn’t do together.  So when they decided to move west from Ontario for the slopes and snow of the Rockies, they knew their adventures together were only beginning.  They both worked as paramedics for the British Columbia Ambulance Service for a number of years, and after several colleagues of theirs had discussed deployments they had participated in, Chris and Kelly were intrigued.  In 2007, Chris deployed to Bangladesh after record flooding affected the impoverished nation, and in 2008, he was part of the assessment team which travelled to the earthquake stricken region of Sichuan, China. Soon after his return, Chris became a charter member of CMAT, and sat on its first Board of Directors.  Kelly’s involvement in the organization soon followed.

Kelly recalls her CMAT experiences fondly.  “I have been very lucky to deploy to both Haiti in January 2010 and then to Japan in March 2011.  While in Haiti the team was invited to attend a church service with some local residents where we were taught some hymns in Creole and English. The next day during an orthopaedic surgery I was tasked with monitoring the patient’s vital signs. The woman was still somewhat conscious and she began singing one of the hymns I had learned at church. I was able to sing along with her while holding her hand. At the end of the song, she looked up at me and whispered ‘thank you’. It was the most rewarding experience of my life, being able to bring that woman some comfort even just for a few moments.”

Chris enlisted in the Canadian forces, and deployed to Afghanistan.  He often drew on his experiences with CMAT during his tour.  He deployed with CMAT to Bangladesh in 2007, China in 2008, and Haiti in 2010.  Now stationed in Trenton, Ontario, both Chris and Kelly appreciate the overwhelming support of their friends and family for their involvement with CMAT. “We find that when we tell people what we do with CMAT they always ask how they can help.  Friends have contributed with monetary donations, dog sitting while we were deployed and assisted us by covering shifts so that we could be away from work.”

Chris and Kelly are both Advanced Care Paramedics. Kelly graduated from the Justice Institute of British Columbia as an ACP in 2007 and now works for York Region EMS in Ontario. She has also recently joined the Red Cross Disaster Management team in Belleville, ON.  Chris continues to serve with the Canadian Forces.
in News /by Valerie Rzepka